Afghanistan Raises Worry About More Terrorism in the U.S.

House Minority Leader Kevin McCarthy, R-Calif., gestures as he speaks at a press conference at the Capitol building on Aug. 27, 2021, in Washington, D.C. (Anna Moneymaker/Getty Images)

House Minority Leader Kevin McCarthy, R-Calif., in a nationally televised interview, is demanding Speaker Nancy Pelosi, D-Calif., bring the House back in session to deal with the terror attacks in Afghanistan and the withdrawal of U.S. troops.His comments came Friday during an interview on television’s “Fox & Friends.” The terror attacks at the Kabul international airport on Thursday killed 13 U.S. service members and scores of civilians.
The U.S. death toll made it the deadliest single incident for American forces in Afghanistan in a decade and one of the deadliest of the entire 20-year war, according to Reuters. Meanwhile, 12,500 more people have escaped from Afghanistan – and more are seeking to leave. Because of this, McCarthy wants lawmakers to vote to block the withdrawal of U.S. soldiers until every American is evacuated, according to Fox News. 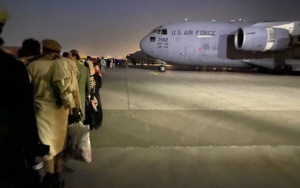 Afghan people queue up and board a U S military aircraft to leave Afghanistan, at the military airport in Kabul on August 19, 2021 after Taliban’s military takeover of Afghanistan. (Photo by Shakib RAHMANI / AFP)

“Long before this collapse in Afghanistan, we have been catching people on the terrorist watch list coming across our border from Yemen. Not on the same day either,” he said.

“What’s going to happen now where we’re watching ISIS grow again in Afghanistan, when 5,000 prisoners were released inside Afghanistan, when they now know where they can come to America? We’re less than three weeks from the anniversary of 9/11 and this administration has put America in this position, this is unacceptable. Nancy Pelosi needs to bring us back into session, bring up this bill, move this deadline and make sure every single American is able to leave Afghanistan.”

The Hill noted Pelosi had called House lawmakers back earlier this week for a two-day session to deal with a $3.5 trillion budget resolution. But the House is now back in recess until Sept. 20.